EURO is the basis of our prices. Prices in other currencies are for your information only and are subject to changing currency fluctuations.

This online shop is using cookies to give you the best shopping expierience. Thereby for example the session information or language setting are stored on your computer. Without cookies the range of the online shop's functionality is limited. Close
You are here: / Jelitto Perennial Seeds / About us / History

Jelitto Staudensamen GmbH has specialised in production, cultivation and seed technology since 1957. We supply seeds for perennials, ornamental grasses, and herbs, with a growing organic herb seed line

In addition to our headquarters in Germany, we have offices in the USA, UK and Japan. We supply gardeners all over the world with more than 3700 species and varieties, guaranteeing best quality seed with high germination and purity.

Our pretreated GOLD NUGGET SEED® germinates uniformly within two to four weeks of sowing, instead of after three to six months as is the norm. Specially produced JET® seeds increase the germination ability and facilitate improved mechanical handling.

We publish a catalogue biennially which details our range and features countless photos and a wealth of information. The catalogue and our shop can be found on the Internet at www.jelitto.com.

Klaus R. Jelitto was born into an old-established horticulturist familiy and discovered his enthusiasm for seeds at a very young age. Founding the company Jelitto was the logical result of this passion.

In 1957 Klaus Jelitto became self-employed representing German nursery products in Sweden. In the early sixties his interests in the perennial seed trade developed, initially as a hobby, but by 1981 perennial seed had become his principal business.

The company has become a market leader in the perennial seed trade. Jelitto is a prime source for 3,700 varieties of perennials, native wildflowers, alpines, ornamental grasses and herbs.

From 1981 to 1992 three moves were necessary due to lack of space. An expandable location has been found in Schwarmstedt on the site of what was previously the co-op "Staudenkontor". Here it has been possible to realise many longstanding ambitions like a new laboratory with special equipment and a trial field with 1.400 different trials of both old and new varieties.

2011 saw the purchase and construction of a 2.3-acre experimental and breeding farm in the immediate vicinity.

2018 Allen W. Bush retires.
2016 JELITTO GOLDNUGGET SEED® are sold initially in 1000 seed-units.
2015 the Jelitto shop www.jelitto.com goes mobile.
2013 the new Jelitto shop www.jelitto.com goes online.
2012 Martin Bachor becomes proxy holder and reinforces the ­company management.
2012 spring sees the presentation of our new breeding station.
2007 Jelitto Perennial Seeds celebrated its 50 years anniversary.
2002 Georg Uebelhart is now majority shareholder.
1996 the North American office is opened, followed by an office for the United Kingdom and Ireland in 2000 and Japan in 2007.
1994 JELITTO GOLDNUGGET SEED® is brought to the market. This is the patented preparation process, designed to promote rapid germination of dormant seed.
1992 the company moved to its new location in Schwarmstedt, a northern German town near Hanover, which remains its headquarters. Apart from providing ample room for growth, the new site has a trial field of con­side­rable size, expan­ded germi­nation labo­ratories and seed pro­cessing equip­ment as well as the climate-con­trolled storage facilities and cold store.

The company now has a staff of 32 skilled workers, master gardeners, LTA and engineers.

The company exports 80% of its products. Customers include nurseries, botanic gardens, seed companies and private plant enthusiasts all over the temperate world. Seed orders are distributed to 7000 customers in more than 65 countries by air mail or couriers.

Breeding and seed production of our perennials takes place in over 20 countries worldwide. See also Seed production.
The seed is delivered uncleaned to Schwarmstedt and is finished in the company's own cleaning division.

Specialized equipment and special seed cleaning machines are used, but to guarantee seed cleanliness of at least 99% the seed will often be cleaned and refined with hand equipment.

Quality control ensures cleanliness, viability and vigor.
To monitor the vigor we have created a modern laboratory for seed testing.

More than 14,000 germination tests are carried out each year.

Breeding work takes many years until a new and stable form can be selected. We do not shy away from the time this takes but offer several new and improved items each year. 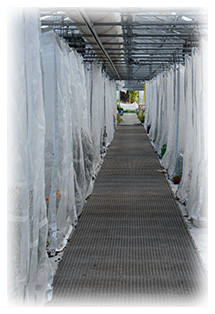 On the company grounds are 1400 different trials of both older and new varieties. Evaluation criteria include winter hardiness as well as growth habit and flowering characteristics. On the nearby experimental and breeding farm built 2011 new varieties are being developed for the future. See also Seed Breeding.

In 1977 Klaus R. Jelitto developed a new procedure for eliminating the seed dormancy for cold germinators like Primrose, Pasque Flower or Gentian. Instead of germinating after 3 to 6 months, the seeds germinate uniformly within 2 to 4 weeks after sowing. Since the patent in 1978, these seeds are known as JELITTO GOLD NUGGET SEED®. In our assortment we offer over 380 different species and varieties in Jelitto Gold Nugget Seed® quality for faster germination. To expand the range of Gold Nugget Seed, further procedures to prepare seeds are developed in our laboratory.

Temperature and humidity control are vital for the well-being of perennial seeds and each seed item is stored according to the species' need. The company has a wide variety of cold storage facilities.

Can‘t find what you‘re looking for?

We are always happy to help, please contact us: